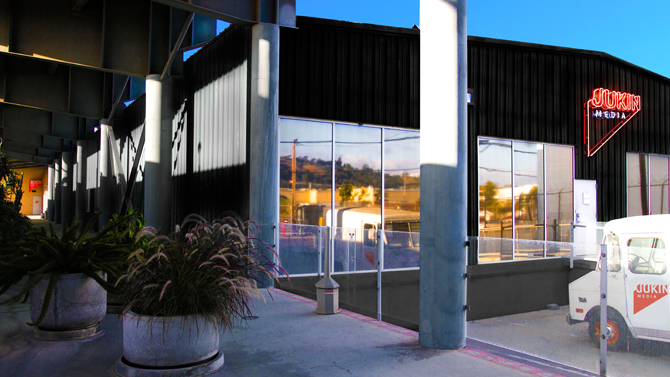 LOS ANGELES -- 8/23/2017 -- Jukin Media, the global digital media company built on the belief that the future of storytelling is user generated, is set to begin construction on a new 14,000+ square foot production facility, driven by growing demand and the company’s recent success in developing and selling original shows to partners like AOL, FOX, Go90, Lionsgate, MTV Networks, Viacom International, and Comcast.

Jukin expects its output of original series to increase significantly over the next six to twelve months, justifying this major investment in a studio facility.

The state-of-the-art facility will be built out in a recently vacated building adjacent to Jukin’s headquarters in the Hayden Tract area of Los Angeles. The facility will feature two stages, permanent and temporary sets, sound mixing suites, a screening room, a green room, and up to 20 video editing suites. Construction is tentatively scheduled for October 1, 2017. The addition of the new 14,000+ square foot facility expands Jukin’s headquarters to more than 30,000 total square feet. Additionally, the company has offices in New York, London, and Sydney.

“We believe that the future of storytelling is user generated,” said Jonathan Skogmo, Founder and CEO of Jukin Media. “We’re developing high-quality, high-production value projects in lifestyle, travel, documentary, and other categories, all through the lens of real people, out in the real world, recording moments from their daily lives."

The new facility will house Jukin’s production and post-production units, its development/ creative team, and it’s owned and operated digital brand teams such as The Pet Collective, People Are Awesome, and FailArmy, which combine for more than 65 million fans and 2.1 billion video views per month. This makes Jukin’s brand portfolio the 11th most viewed social video network in the world according to Tubular’s most recent Top Media & Entertainment Properties list.

In addition to satisfying the demand for original series, the new studio space will also allow the company’s digital brands to continue to increase output of short form series, live streams, and branded content in collaboration with advertisers.

“Our new production space will provide an immediate lift in production value for our brands, help us scale operations across the business, and give us the resources that will help bring the company through our next phase of growth,” said Lee Essner, President and COO.

Jukin Media is a global entertainment company built on the belief that the future of storytelling is user generated. Jukin provides a wide range of solutions that allow premium brands, publishers, and media networks, to commercially utilize user­-generated video content. Jukin produces original content for TV, the web, and emerging platforms, and is owner/ operator of a portfolio of social video properties that includes FailArmy, People Are Awesome, The Pet Collective, and JukinVideo; the properties combine for more than 65 million fans online and 2.1 billion monthly video views. For more information, visit http://jukinmedia.com.