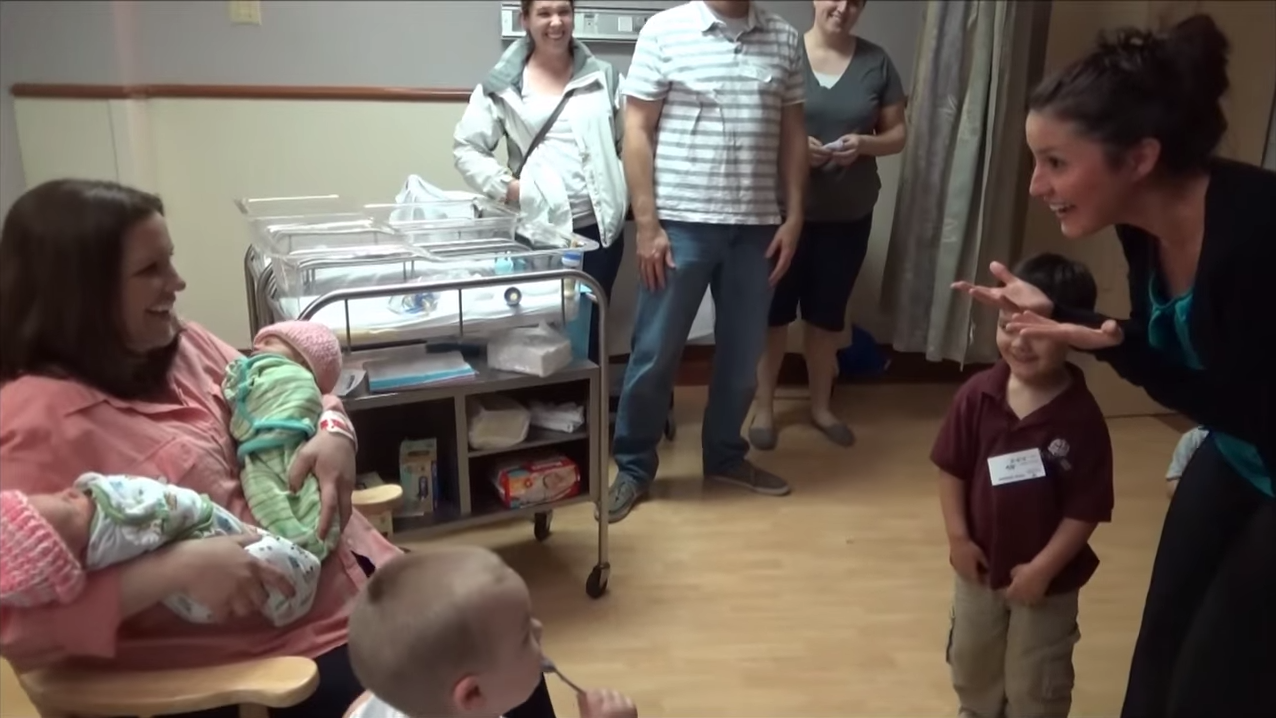 One by one, family and friends were invited into their hospital room. They were greeted by the two bundles of joy. Korey Rademacher recorded everyone when they introduced their babies and the reactions were priceless. Family and friends were frozen in disbelief and immediately filled with joy. Korey and Sharon then went to Skype to surprise all the family and friends that couldn’t be with them in person. Each skyper took their turn to guess the sex of the baby and then were answered by Korey revealing Sharon holding the two twins.

Korey uploaded his video to YouTube on April 11, 2015. Four days later, Korey’s video had 3.8 million views and was picked up by outlets like Cosmopolitan and ABC. Today, the Rademacher’s video has more than 17 million views and has been viewed everywhere from Belgium to Japan.

Jukin: Describe your video. How did it happen?

Korey: The idea for the video came about when my wife (Sharon) and I were in the Doctor's office and just had the ultra sound done. We were both in shock that we were going to have twins. Right after the Doctor left the room we both agreed it would be really fun to not tell anyone and to shock our friends and family they day they were born.

Jukin: What made you pull out your camera to record?

Korey: It was all planned. I had plenty of time, about 8 months, to think of the best angles to shoot the video as people walked in. It was a little tough for those that we told via Skype but it still worked out.

Jukin: How did you feel when you watched your video back?

Korey: It was great. I was really happy with how it turned out considering I've never made a video before. After the first day or two it had 43,000 views which I thought was awesome. I had no idea it would get to what it is today, 17 million!

Korey: I was in disbelief each time I saw the view count. I was in shock when it hit 43,000. Then one night when my wife and I were feeding the babies I noticed it go up 500,000 in a matter of an hour or two. The next morning it had over 3 million views. I couldn't wrap my head around how big it had gotten.

Korey: I chose to work with Jukin for the simple fact that I had no time to do that stuff for myself. I had executives from ABC, CBS and NBC calling me wanting to do interviews. It was fun but very overwhelming. Jukin helped to take off some of the pressure that came with the video going viral.

Jukin: Did you get the opportunity to see your video on TV?

Korey: My wife and I actually don't have cable so we actually never saw ourselves on TV live. Of course, friends and family would send us links on Facebook though. We were so busy with the twins that we didn't really have much time to soak in what was going on all around us. To be honest, I think my family in Michigan was probably able to enjoy it more than us. We were just trying to find some time to sleep since we're up all night with the babies.

Jukin: What do you think about your video now?

Korey: I think that it'll be a great memory for our girls to see when they get older.

Korey: There's isn't much I would do differently. One thing I kind of wish I would have done is buy a second camera to get more angles from everyone.

Korey: Our friends and family and co-workers loved the video and of course they gave me a hard time calling me "Hollywood".  We all knew it wouldn't last long but it was fun while it lasted.

Jukin: What did you learn from your experience?

Korey: I learned that if the media wants to get your info they can and will. I had an NBC executive list out all the email address I've ever used and asked which one they should email. She listed one that I hadn't used in almost 20 years! I thought it was pretty comical.

Korey: My advice would be to take your time in making any decisions. When a video goes viral everyone wants a piece of it. You just need to be organized and have people get in line. Especially in our case with having two new babies, it was important to keep our priorities straight and make sure we're enjoying the moment with our kids and not spending too much time in interviews.

Korey: The international exposure I think was the biggest impact that I'll never forget. It was one thing for the U.S. media to get a hold of our video and spread it, but I thought it was pretty incredible when people were calling us from Japan, Australia, Sweden, Belgium, Germany and other countries for us to do an interview with them.

Jukin: What do you wish you knew before this process started?

Korey: I wish I knew more about online marketing. There's so much to learn with that industry and I think I could have done some really cool things had I known what I now know today. Oh well, live and learn.